Yrel
Light Of Hope
After traveling to an Alternate Draenor, the forces of Azeroth saved the acolyte Yrel from the Iron Horde. With their aid, she rose to the rank of Exarch and fought back the demonic invasion of her world. Now, she finds herself where time, space, and dimensions converge: the Nexus.
Trait
Divine Purpose
Cooldown: 8 seconds.

Activate to instantly charge Yrel's next Basic Ability at no mana cost.

Charging up this Ability increases its damage up to 140, and healing up to 320.
Righteous Hammer
Mana Cost: 65
Cooldown: 6 seconds
Swing Yrel's hammer, dealing 38 damage to enemies in front of her and knocking them away.

Charging up this Ability increases its knockback distance, and damage up to 125. Enemies hit at maximum charge are Stunned for 0.75 seconds.
Avenging Wrath
Mana Cost: 65
Cooldown: 6 seconds
Leap to a location, dealing 225 damage to enemies in an area and Slowing them by 50% for 1 second. 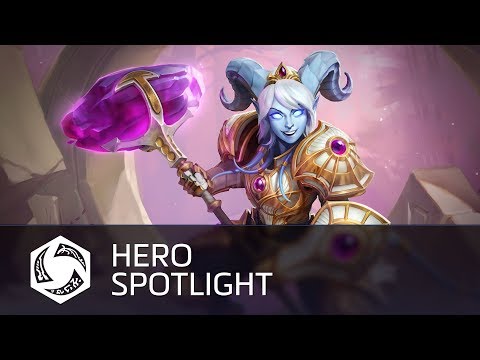