Whitemane
High Inquisitor
As the High Inquisitor of the Scarlet Crusade, Sally Whitemane zealously leads her champions in a neverending war against the undead. Under her guiding Light, all who have been touched by the plague of death will be purged by her cleansing flame... no matter how much they protest.
Trait
Zeal
Whitemane's healing Abilities apply Zeal for 8 seconds. Allies with Zeal are healed for 100% of the damage Whitemane deals to Heroes.

Activate to gain 25% Spell Power and lose 15 Armor for 5 seconds. Can be cast while channeling abilities.
Abilities
Desperate Plea
Mana Cost: 40
Heal an allied Hero for 140 and gain Desperation for 4 seconds.

Desperation increases Desperate Plea's Mana cost by 40, and stacks up to 3 times.
Inquisition
Cooldown: 12 seconds
Channel on an enemy Hero for up to 3 seconds, dealing 50 damage every 0.5 seconds and Slowing them by 30%.

Removes a stack of Desperation.

Shares a cooldown with Clemency.
Searing Lash
Cooldown: 6 seconds
After 0.5 seconds, smite enemies in a straight line for 82 damage.

If the first strike hits an enemy Hero, a second strike will occur after a short delay.
Clemency
Cooldown: 12 seconds
Activate to cast Inquisition on an allied Hero, healing them for up to 329 over 3 seconds while Channeling.

Removes a stack of Desperation.

Shares a cooldown with Inquisition.

Heroics
Scarlet Aegis
Cooldown: 60 seconds
Bolster the spirits of nearby allied Heroes, healing them for 300 and granting them 40 Armor for 4 seconds.
Divine Reckoning
Cooldown: 75 seconds
After 1 second, consecrate an area for 4 seconds, dealing 50 damage every 0.5 seconds to enemies inside. 25% of the damage dealt to Heroes is returned as Mana.
see all builds Pity the Frail Indulgence Zealous Spirit Divine Reckoning Harsh Discipline Shared Punishment Judgement Day 1,317 views
0 yays
0 comments Whitemane is now up! by  CCL on 07/30/2018 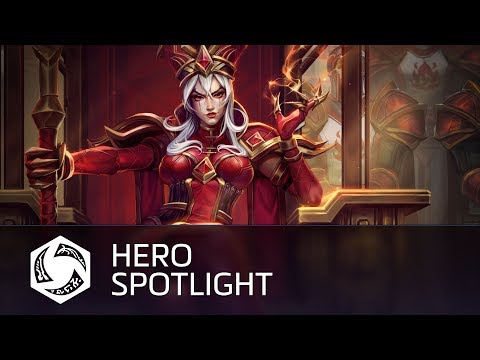