Maiev
The Warden
Maiev Shadowsong stood watch over the imprisoned Betrayer for ten thousand years, and hunted him relentlessly after he was released. Some say she's determined; others say she's obsessed. Either way, she will stop at nothing to ensure the security of her world.
Trait
Vault of the Wardens
Cooldown: 13 seconds.

Leap into the air, becoming Immune to all hostile effects for 0.75 seconds.

Hitting at least 2 enemy Heroes with Fan of Knives reduces its cooldown to 0.5 seconds, and refunds its Mana cost.
Umbral Bind
Mana Cost: 55
Cooldown: 14 seconds
Maiev's next Basic Attack cleaves and applies a tether to enemy Heroes hit for 2.5 seconds. If a tethered Hero moves too far from Maiev, they are pulled toward her, dealing 110 damage and breaking the tether.
Spirit of Vengeance
Mana Cost: 50
Cooldown: 13 seconds
Send a shadow of Maiev outward that will return to its cast location, dealing 150 damage to enemies along both paths. If an enemy Hero is hit, reduce the cooldown by 4 seconds.
Heroics
Containment Disc
Mana Cost: 50
Cooldown: 40 seconds
Throw a glaive in the target direction. If an enemy Hero is hit, Containment Disc can be reactivated to remove their vision and Time Stop them for 4 seconds. Leaving Containment Silences the enemy Hero for 1.5 seconds.

I legendary notes
By Homi on 11/13/2018
“Your Q is a crescent shape which allows for interesting ways to reset it. If the 2 enemies are far from each other, use the tips of the crescent to try to hit them. If they're close, use the curve”
We need more legendary users to weigh in!
Are you sure you want to delete this note? 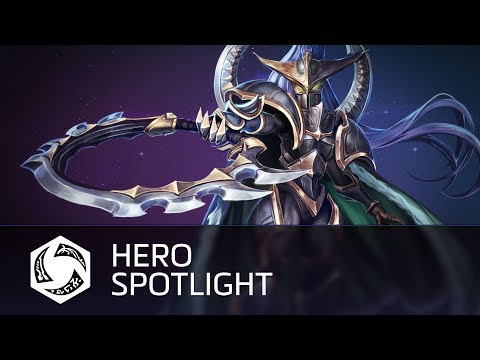