Imperius
Archangel of Valor
Leader of the Angiris Council and Aspect of Valor, Imperius has valiantly led the armies of the High Heavens to a bounty of victories over the demons of the Burning Hells. While his methods are exact and severe, there is no greater defender of righteousness in the entirety of creation,
Trait
Valorous Brand
Each Basic Ability marks enemy Heroes hit for 10 seconds. Basic Attacks consume the target's marks, dealing 20% bonus damage per mark and healing for 75 per mark.
Abilities
Celestial Charge
Mana Cost: 40
Cooldown: 10 seconds
Lunge towards a targeted direction and stab, dealing 35 damage. If an enemy Hero is hit, Channel to Stun for 1 second and deal 80 additional damage when it fully finishes.
Solarion's Fire
Mana Cost: 50
Cooldown: 8 seconds
Release a fiery wave that deals 110 damage. Enemies hit by the center take 50 bonus damage and are Slowed by 40% for 3 seconds.
Molten Armor
Mana Cost: 75
Cooldown: 12 seconds
Shroud Imperius in flames for 3 seconds, striking a nearby enemy for 19 damage every 0.25 seconds. Imperius heals for 50% of the damage dealt, increased to 100% against Heroes.
Heroics
Angelic Armaments
Mana Cost: 70
Cooldown: 70 seconds
Summon a ring of blazing swords that grants 850 Shield for 3 seconds.

If the Shield lasts the full duration, this ability can be reactivated within 5 seconds to launch 6 swords toward an area, each dealing 140 damage to the first enemy hit.
Wrath of the Angiris
Mana Cost: 80
Cooldown: 80 seconds
After 0.75 seconds, charge in the target direction, lifting the first enemy Hero hit into the Heavens. While in the air, Imperius can steer the landing location by moving.

“Adds great follow up and pick potential with a lead CC and ultimate that can place someone anywhere you want. However is very weak at disengaging or finding a way out of a fight once in, play angles!”
By workhorse on 01/02/2019

HeroesHearth Co-Founder | Support Pleb
“Angelic Armaments is going to be bonkers.”
We need more legendary users to weigh in!
Are you sure you want to delete this note?

Are you sure you want to delete this note? 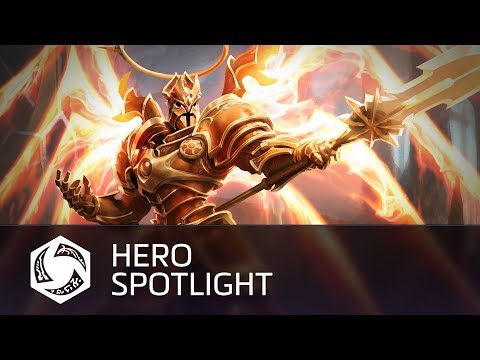