Hogger
Scourge of Elwynn
Once largely a threat to fledgling adventurers' egos in Elwynn Forest, the Riverpaw gnoll Hogger has finally found a realm vast enough to sate his hunger... which is expanding to fill the space.
Trait
Loot Hoard
Cooldown: 20 seconds

Throw a pile of junk onto the battlefield, dealing 102 damage in a small area, knocking enemies away and acting as terrain for up to 5 seconds.

When the Loot Hoard expires or is destroyed, a chunk of Meat falls out that can be picked up to restore 3% of maximum Health every second for 4 seconds.

Reactivate to destroy Loot Hoard.
Abilities
Staggering Blow
Cooldown: 12 seconds
Swing your chain in a wide arc, dealing 140 damage to enemies hit and knocking them away. If an enemy hits terrain, deal an additional 150 damage, Stun for 0.75 seconds, and gain 15 Rage.

Ez-Thro Dynamite
Cooldown: 8 seconds
Toss a bundle of Dynamite with a 1.5 second fuse. Upon detonation, enemies take 180 damage and are Slowed by 30% for 2 seconds.

The Dynamite instantly detonates when landing directly on an enemy Hero and grants Hogger 10 Rage.
Hogg Wild
Cooldown: 14 seconds
After 0.25 seconds, become Unstoppable and uncontrollably spin towards the target direction, ricocheting off terrain. Ricocheting off terrain refreshes the duration.

Every 0.125 seconds, deal 44 damage to nearby non-Structure enemies. Damage against Heroes is increased by .5% for each point of Rage.
Heroics
Hoardapult
Cooldown: 60 seconds
Launch an empowered Loot Hoard with Hogger attached, dealing 100 damage and Slowing enemies by 50% for 2 seconds. 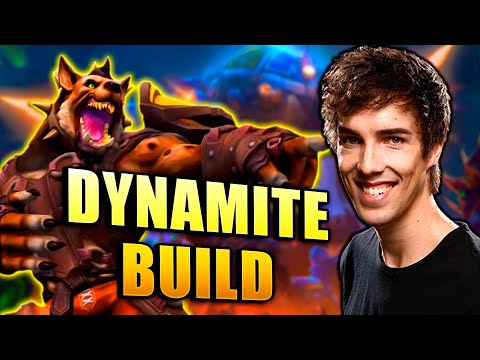