Ana
Veteran Sniper
As a founding member of Overwatch and one of the world's best snipers, Ana Amari uses her skills to protect the innocent. Though she went MIA after losing her eye, Ana's sense of duty and responsibility has brought her back to the fight.
Trait
Shrike
Basic Attacks apply a Dose to enemies, dealing 40 damage over 5 seconds, plus additional damage equal to the current number of stacks on the target stacking up to 5 times. Every 0.5 seconds, Ana is healed for 60% of the damage dealt by Shrike.

Aim Down Sights:
Activating Shrike reduces your movement speed by 25%, but increases the Range of Healing Dart and Sleep Dart by 25% while also allowing them to pierce one hero. Lasts until canceled.
Abilities
Healing Dart
Mana Cost: 10
Cooldown: 2 Seconds
Fire a dart which heals the first allied Hero hit for 195 Health. Does not affect full Health Heroes.
Biotic Grenade
Mana Cost: 50
Cooldown: 16 seconds
Toss a Grenade at the target area. Allied Heroes hit are healed for 152 Health and received 25% increased healing from Ana for 4 seconds. Enemies hit take 60 damage and receive 100% less healing for 1.75 seconds.
Sleep Dart
Mana Cost: 50
Cooldown: 14 seconds
Fire a dart that puts the first enemy Hero hit to Sleep, Stunning them for 3 seconds. Sleep's effects end instantly if the target takes damage after the first 0.5 seconds.

Cannot be used on Ana.
Eye of Horus
Mana Cost: 45
Cooldown: 60 seconds
Assume a sniping position, gaining the ability to fire up to 6 specialized rounds with unlimited range. Rounds pierce allied and enemy Heroes but collide with enemy Structures in their path. Allies are healed for 225 and enemies are damaged for 135. Deals 50% less damage to Structures. 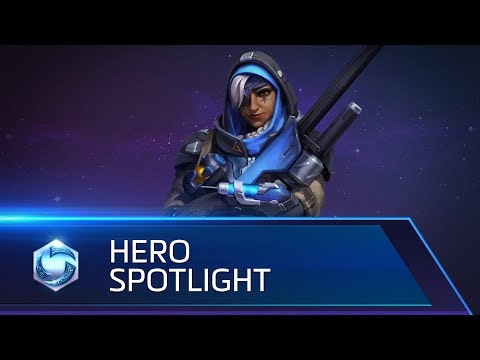 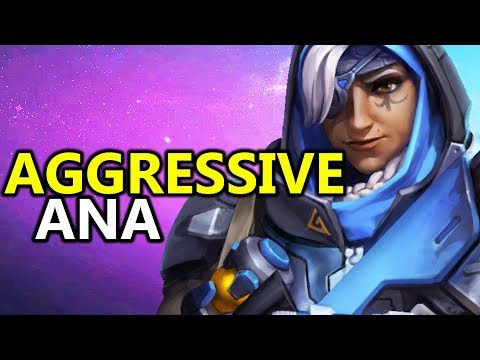