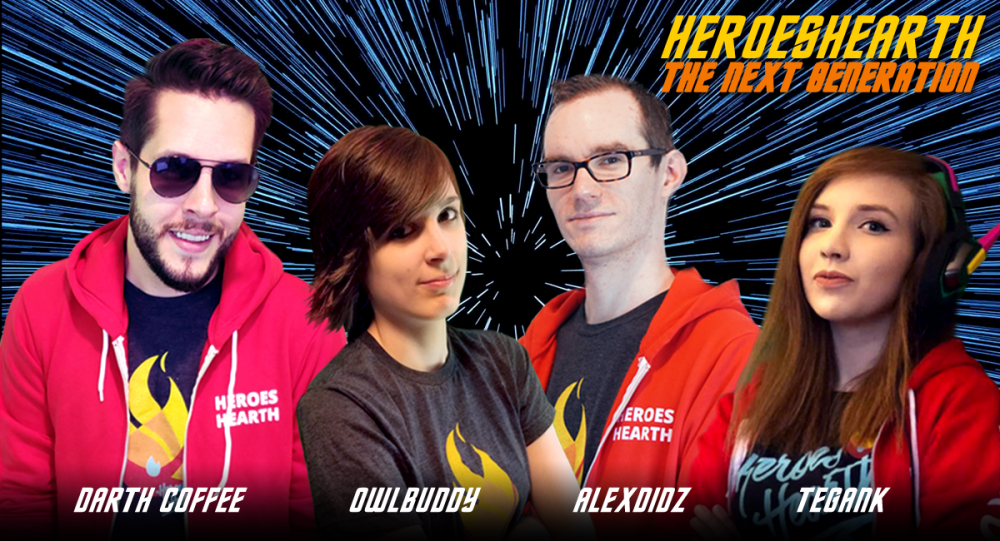 We're ready for ranked! [America: Blog 4]
When Tegank woke up on the dull, grey Wednesday our story starts, there was nothing about the cloudy sky outside to suggest that strange and mysterious things would soon be happening on the HeroesHearth channel. She booted up her stream and happened to be put up against none other than Workhorse himself, who she beat, ez clap. An alliance was created and joined by AlexDidz, OwlBuddy and darth_Coffee, they were a force to be reckoned with. Tegank made it to Gold 4 (at last) but later fell from grace as the day went on. It was not her finest hour, but it was a fun hour nonetheless. I am here to discuss one particular game from that night, it takes place on Dragon Shire, a colourful three-lane garden battleground set in the realm of King's Crest. The team had just won a brawl and they were raring for more. That is when Owlbuddy decided to first pick The Butcher, CONFIDENCE. AlexDidz picked Medivh, Workhorse, Xul and darth_Coffee, Garrosh. The team needed a solo laner, they needed a solo lane Li Li main, enter Tegank. What is this blog about you may ask? Well, Workhorse asked for a 'play by play of the Li Li solo lane experience', so here it is.

For this experience, I had to look the part - so I obviously selected the explorer Li Li skin. I was going on an adventure and needed the outfit to match: You know, did you ever think about getting out and exploring a little? You know? There’s a whole world out there.

Overall, the adventure was pretty lonely - as you would expect. My only company was the enemy Zarya who, apparently, could not 1 vs 1 a Li Li as I killed her several times throughout the laning phase. Furthermore, I managed to capture and hold the top shrine several times with little help which I would consider an impressive feat - despite this, we never actually managed to secure the Dragon Knight. My overall feelings for the entire situation were 'oh gosh, please someone save me from the loneliness, I'm a smol scared panda' and 'aaaaaaaaaaa'. I'm uncomfortable solo laning even when I have a solo laning hero, let alone as a support.

That being said, we did lose the first Dragon Shrine and my solo adventure soon came to an end as we needed to work as a team to have any hope of winning (reunited and it feels so good). However, the game seemed to snowball from that point onwards. We, tragically lost our keep. The enemy team was pushing with no end in sight, we needed our stacked butcher and our stacked butcher we got - for a few seconds. Unfortunately, tragedy striked again and we lost our Butcher, then our Xul and then the Dragon Knight. There was no coming back from this - the enemy team was too strong even though we had a stacked butcher and a SOLO LANE LILI.

In this moment, I want to give a special shout out to the play of the game from none other than Workhorse himself:

Sadly, this game led to my demotion from Gold 4 - but I am confident I can make it back in, ez np. Jokes and memes aside however, I had a great time playing Team League with the rest of the HeroesHearth stream team crew. Hopefully we can do more like this in the future and I'm hoping the audience had just as much fun as I did! If you haven't already, please give the HeroesHearth channel a follow - we stream every Wednesday!  Also, if you would like to check out the game discussed here today then check out this link (it's the second game in OwlBuddy's stream - around half an hour in).

As always thank you for reading and thank you if you are one of the people who watches #HHEWednesdays we all appreciate you so much!
Tweet