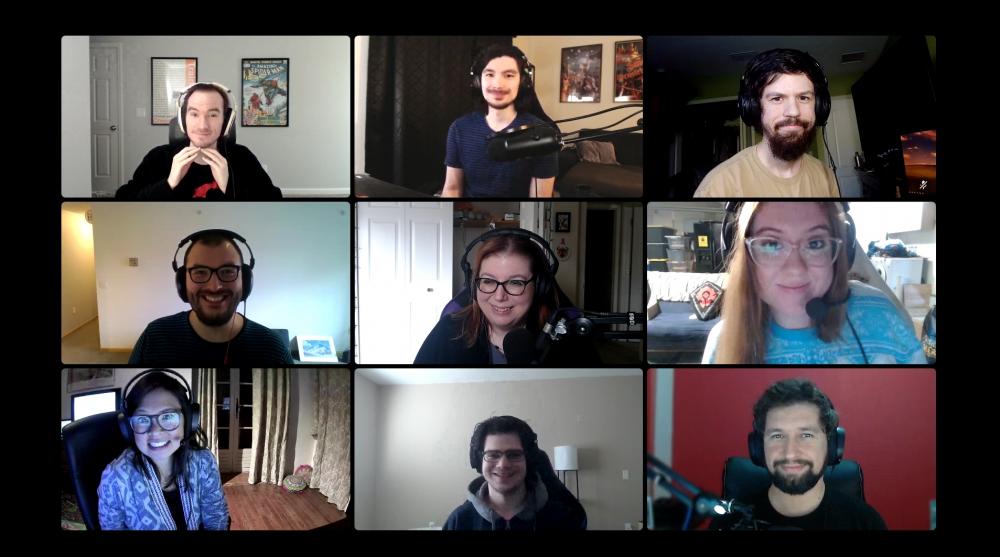 From the Commissioner's Desk: Meet the Team Behind the CCL Broadcasts!

Hey CCL fans and friends! I wanted to introduce you to the team who are working behind-the-scenes on the CCL broadcasts every weekend. This talented group of people deserves all the accolades I can give them - their passion and love for Heroes shows in everything that they do, and I'm so grateful to have them on this project.

I snapped a picture of production team during our Discord call that we're on while the broadcast is happening. This was the first time a lot of us have seen each other's faces because we're always communicating only via audio! They're located at all parts of the globe, some of them staying up until 2am or later, depending on how long the broadcast day lasts.

I'm so glad they humored me and allowed me to shout them out to you.
Here is the amazing team behind the scenes during CCL broadcasts.

AlexDidz - Livestream Manager
Alex has many jobs during a broadcast - making sure everything on Twitch, YouTube and Facebook is running smoothly at all times, moderating chat, and creating/clipping/tweeting game updates on the fly. On our production calls, Alex is always ready with the appropriate gif in chat when our conversation drifts off the rails while the game is going on.

Chenzzy - Live Graphics Operator
Chenzzy has the very important role of changing, updating and sending the information graphics that are on the screen throughout the broadcast - these include caster nameplates, match scores, map picks/bans, league standings and a whole lot more. He and Joseph, our stream director, are a well-oiled machine, constantly communicating with each other at all points in the broadcast. Chenzzy has a busy and detailed role to make sure all the information is correct and shows up on cue from the director.

EISA - In-Game Admin
EISA works game 2 of each day, making sure the teams' map picks and bans are submitted, the lobby is set up correctly and communicates information in-game. If there's a pause in game 2, Twitch chat usually notices that's EISAAAAAAAAA who unpaused it!

Joseph "IntheFlesh" - Stream Director
Joseph is air traffic control and herding cats wrapped up into one person. He uses two Discord accounts - one to listen/talk to the casters and one to communicate to the production team. His job requires constant vigilance and focus, as well and quick problem-solving when things go wrong. He keeps us all on task, as well as gets us to talk about food like a true champion.

Lakefu - Livestream Coordinator
Lakefu and AlexDidz work closely together to make sure the stream is running smoothly and chat is moderated well across all the locations. Lakefu also runs the Twitch Predictions after each draft so everyone can spend their channel points and she makes sure we have selected the cutest emotes in BTTV for everyone to enjoy.

Littlepatata - In-Game Admin
Littlepatata lives in France and she works game 1 of each day as admin and gathers up all the information on who we will interview post-match. Littlepatata is also the designer, creator and operator of the CCL Fantasy Bot in the HeroesHearth Discord, where fans can make their CCL fantasy team each week to try and beat out the leaderboard.

Nightmare - Observer
Nightmare is a veteran HGC observer and we're so glad to have him capturing the plays in CCL. He runs the clean feed for our co-streamers who wish to just have gameplay without caster commentary. Each week, we can't wait to hear what Nightmare has ordered for food so we can all get hungry with him.

Warak - Video Editor
Coming at us all the way from Portugal, Warak brings his YouTube expertise to CCL by setting up the YouTube live broadcast and the clean feed for co-streamers. He is the editor of all of our social media and YouTube video content, and his meme game is ranked grandmaster at all times.

I hope you enjoyed this peek behind the curtain at the people who make the magic happen!