As promised, it's time to reveal the plans we've put together for HeroesCCL Season 3. There's a lot of information to share, so we'll do a TL;DR breakdown up front with the details below for further clarification, including some notes from Commissioner Jules Scott.

If this is the first time you've heard about HeroesCCL, you can refer to this blog post for all the details and the format about Season 1 and this blog post about how Season 2 was structured.

HeroesCCL Season 3 is a 13-week long Heroes of the Storm league composed of Masters-plus players from any region.

HeroesCCL is owned and operated by Wisdom Gaming Group d/b/a Heroes Hearth and not affiliated with or administrated by Blizzard Entertainment, Inc. in any way.

The eight (8) Orgs from Season 2 will continue to be a part of CCL and those Orgs are selected by CCL Admin. Orgs are responsible for drafting their team, managing their rosters and paying Players their monthly stipend and prize money.

Summary of Changes in Season 3

(You can read up on the details of these changes after the summary.)

Eight (8) Organizations (Orgs) were selected by HeroesCCL for the league.

There will not be a mandatory re-draft in Season 3.

Teams will be permitted to release players or make 1-for-1 trades between Organizations from the end of Season 2 (July 24, 2021) to the roster lock deadline of September 16, 2021.

After the roster lock deadline, Orgs cannot pick up or sign players to their rosters until Draft Day on October 9, 2021. The teams will fill their open roster spots through a standard draft format with a closed Free Agent pool. (See Draft section below for further details.)

All Players who are released from their rosters must sign up* for Free Agency again for Season 3 to be eligible to be re-drafted.

Commissioner's Note: We learned a lot during Season 2 and what was most important to the Players, Orgs and fans when it came to how rosters are built and maintained in CCL. One of the key findings in Season 2 is that there were no roster changes made outside of draft week, which indicated to us that the teams had really settled into their rosters. We made the call to not require roster releases for Season 3 to really see how the teams grow and progress with the Players they want to work with.

However, this doesn't mean that mandatory roster releases will be gone forever. As Jaycie "Gillyweed" Gluck and I spoke about in our Season 3 announcement video in July, our future plans include expansion of the league when the time is right. Expansion plans would likely lead to possible roster shuffles to ensure the best level of competitive integrity for all the teams, so we want to prepare you for that possibility down the road.

On August 23, 2021, HeroesCCL will open Player applications to the Season 3 Free Agent Pool. You can access the Free Agent Application here.  Anyone who signed up for Free Agency in Season 1 or 2 must sign up again in Season 3 if they wish to be eligible for the draft in Season 3.

No member of an Org’s leadership team or administration staff that works directly with the CCL team will be permitted to compete in CCL as a Player at any time.

To enter into Free Agency a Player must achieve a Master Rank or higher at some point in Storm League 2021 Seasons 1 or 2 and submit a screenshot of this achievement in their Free Agent application. Free Agent applications will close on September 13, 2021 and will not reopen again during the season. Players from any region who meet the eligibility requirements may enter the Free Agent Pool. All games will be played on the North American Central server.

Players do not have to participate in any Free Agent Open Tournament to be drafted by an Org.

Commissioner's Note: We liked the changes we made in Season 2 to create the Free Agent Open Tournament system and we'll be continuing that process in Season 3. All games in the round of 8 and beyond will be broadcasted on our Twitch channel.

Draft pick order for Season 3 will be determined by the final placements of the Season 2 playoffs and grand finals. The draft will be a standard draft, ranked by lowest placement to highest placements.

The final placements in Season 2 were as follows:

Below is the draft pick order determined for Season 2 (if applicable):

The finalized draft order will be released after the roster lock deadline on September 16, 2021 and the number of open roster spots has been determined.

Once the draft has concluded, the Org has one week (7 days) to enter into an agreement with each player for the duration of the season.

Commissioner's Note: We have simplified the draft process this season to make it more straightforward and streamlined. The draft will continue to have the excitement of "who will get selected by whom" but with fewer unknowns like the trading of draft spots on the fly.

On Draft Day, we will be sharing the draft results as they happen via our social media channels and website but will not be broadcasting it live this season. As much as we love the excitement of a live draft show, the uncertainty of how many roster spots will be open to fill makes it difficult to plan a full broadcast.

The community is invited to make those mock drafts, stream and talk about the Draft results as they're revealed on October 9th! 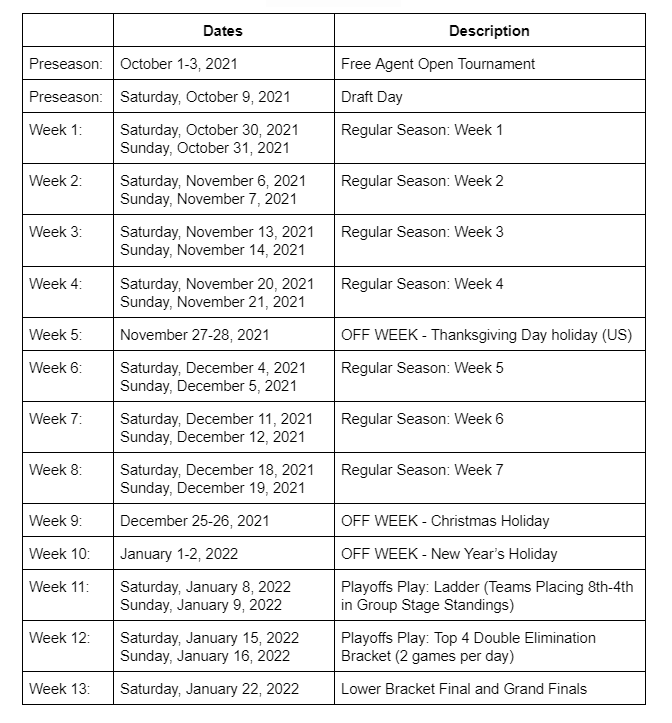 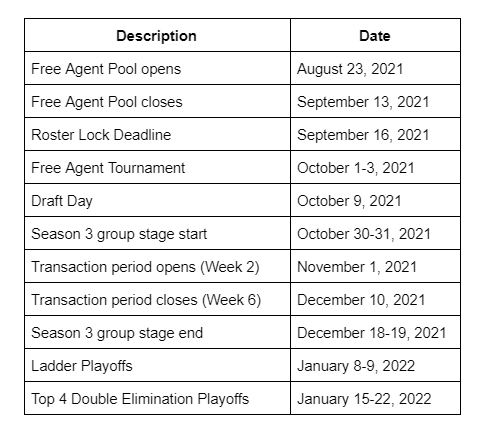 Commissioner's Note: Some of our eagle-eyed fans may notice there is no Icebreaker Tournament listed in Season 3. Our parent company, Wisdom, has some scheduling conflicts that would require us to push back when we would like to start the season. However, although the Icebreaker Tournament provided a great way for teams to “break the ice,” it also sacrifices the “first look” at how teams match up that we would otherwise get in league play. Additionally, the tournament hasn’t ever landed the way we at HeroesCCL have wanted for the league. Rather than changing the tournament to fit our production calendar, we decided to use this opportunity to try a season without it and see how league play shapes up as a result. As always, let us know your feedback as we continue to build a league structure that feels great for all involved.

Each season, the Players of CCL vote for their top 9 map choices to help us create that season's map pool. In Season 3, we will survey the 48 rostered Players after the draft on October 9th.

We'll share the final map pool in a separate announcement after the survey results have been tallied.

It won't be too long and CCL will be back again!

In the meantime, Commissioner Jules Scott will be answering questions on an AMA on the Heroes Subreddit on Tuesday, August 24th at 2pm ET/11am PT/9pm CEST.

To stay as up to date as possible, here's where you should make sure to check often:

Thank you again for your continued support of HeroesCCL! We are so excited for this new season and the next stage of competitive Heroes of the Storm.