It's time for us to reveal the big plans we've put together for HeroesCCL Season 2. There's a lot of information to share, so we'll do a TL;DR breakdown up front with the details below for further clarification.

Please note that there are still portions of these plans that are in active development. We'll continue to release information along the way and keep you informed as plans are finalized.

If this is the first time you've heard about HeroesCCL, you can refer to this blog post for all the details and the format about Season 1.

Let's get into it!

HeroesCCL Season 2 is a 15-week long Heroes of the Storm league composed of Masters-plus players from any region.

HeroesCCL is owned and operated by Wisdom Gaming Group d/b/a Heroes Hearth and not affiliated or administrated by Blizzard Entertainment, Inc. in any way.

Eight (8) Orgs will continue to be a part of CCL and those Orgs are selected by CCL Admin. Orgs will be responsible for drafting their team, managing their rosters and paying Players their monthly stipend and prize money.

One Org spot will be re-filled after the exit of Sidestep Kings in Season 1. Org applications opened February 1, 2021 and will close February 15, 2021.

Summary of Changes in Season 2

(You can read up on the details of these changes after the summary.)

Eight (8) Organizations (Orgs) were selected by HeroesCCL for the league in Season 1.

There will be a mandatory re-draft in Season 2 for all Season 1 CCL Organizations for a portion of their roster.

Commissioner's Note: It's very important for us that we create a path to entry into the league and foster the competitive scene by creating opportunities for new players to enter the league each season. Protecting 4 of 6 players on a roster allows the Orgs to maintain over 60% of their core roster, but also creates parity. The higher performing teams will have to work to maintain their dominance, and the lower performing teams have opportunities to pick up players to improve their performance.

On February 15, 2021, HeroesCCL will open Player applications to the Season 2 Free Agent Pool. Any Player who signed up for Free Agency in Season 1 must sign up again in Season 2 if they wish to be eligible to be drafted in Season 2.

To enter into Free Agency a Player must achieve a Master Rank or higher at some point in 2020 Seasons 3, 4 or 5 and submit a screenshot of this achievement in their Free Agent application. Player applications will close on March 8, 2021 and will not reopen again during the season.

Players from any region who meet the eligibility requirements may enter the Free Agent Pool.

All games will be played on the North American Central server.

No member of an Org’s leadership team or administration staff that works directly with the CCL team will be permitted to compete in CCL as a Player at any time.

Commissioner's Note: Opening HeroesCCL to players from all regions was a revision we made early on after the announcement of Season 1, and we feel it's been a great benefit to the league's success.

Once the Free Agent pool has closed, the eligible Free Agents will be invited to compete in two (2) Free Agent Open Tournaments run by HeroesCCL.

Players do not have to participate in any Free Agent Open Tournament to be drafted by an Org.

Note: More details regarding the Free Agent Open Tournament format and signups will be released after the close of the Free Agent Application Period (after March 8, 2021).

Commissioner's Note: We received a lot of feedback in Season 1 that the Exhibition Season did not give enough opportunities to all of the Free Agents to showcase themselves. We've revised our Exhibition format in Season 2 to give all Free Agents the chance to network within the CCL Free Agent Pool, form their own teams and compete twice during the Free Agency season to show their skills to potential Org scouts.

The details of the Free Agent Open Tournaments are TBD - we'll be able to finalize our planning in early March once we get a better sense of the number of players signed up in the Free Agent pool.

Draft pick order for Season 2 will be determined by the final placements of the Season 1 playoffs and grand finals. The draft will be a standard draft, ranked by worst record to best record.

The final placements in Season 1 were as follows:

Details regarding draft pick order are still being finalized. We'll release those details at a later date.

We will continue to maintain our current Player Transaction system with two Draft Transactions and two Regular Season Transactions that was established in Season 1. You can read those details here: https://wsdm.gg/CCL-Draft-Transactions

Commissioner's Note: We are working closely together with the Orgs to create a draft pick order system that makes the most sense based on the number of open spots on the rosters. We'll know more after the roster protection deadline of February 15, 2021. 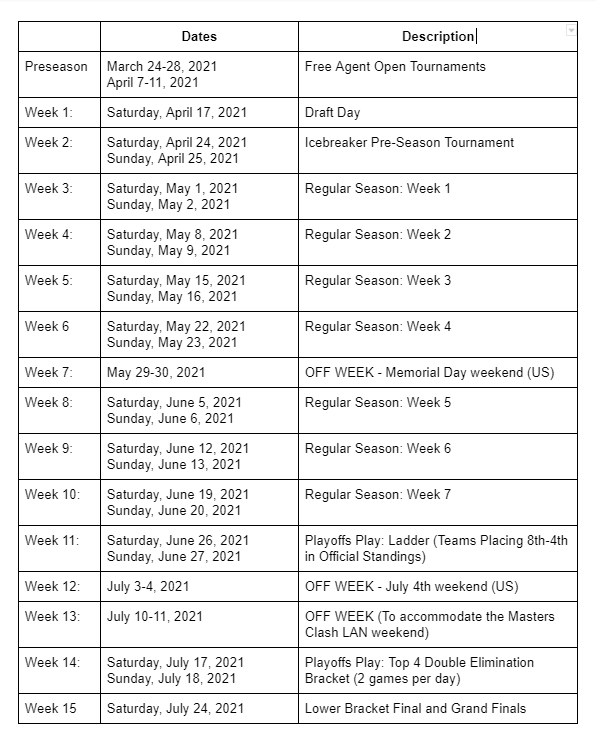 Commissioner's Note: The schedule was modified on February 9, 2021 in collaboration with the Masters Clash admin team and the CCL Orgs. An extra week was added between the ladder playoffs and Top 4 playoffs to allow Masters Clash players to attend their LAN event on July 10-11, 2021.

The 48 Players of CCL Season 1 were given a survey to rate their top 9 map picks for Season 2.

They have selected the following maps for Season 2 by majority vote:

Commissioner's Note: The map pool remains largely unchanged. Volskaya Foundry is out from Season 1 and Alterac Pass is in. Let the debates in Discord begin. :)

We hope you're as excited as we are about the upcoming new Season of CCL! This is just the first of many announcements that we'll be making throughout the upcoming weeks as we progress through the preseason and move into draft and regular season.

Commissioner Jules Scott will be answering questions on an AMA on the Heroes Subreddit on Tuesday, February 9th at 2pm ET/11am PT.

To stay as up to date as possible, here's where you should make sure to check often:

Thank you again for your outstanding support of CCL. We can't wait to watch the action with you again!

Comments
There are no comments for this post.
Fury
Nice.
Nozdub
So freaking excited! Can't wait until April =D